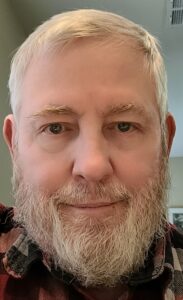 PRESENT-DAY NEW MEXICO HAS HIGH CRIME, NOT ENOUGH PRISONS, INDIAN CONFLICTS AND AN ACTIVIST REPUBLICAN GOVERNOR WARRING WITH LEGISLATORS AND JUDGES. JUST LIKE BACK IN 1880.

The Curse of Lew Wallace

On April 29, 1881, New Mexico Governor Lew Wallace sat down in Santa Fe’s Palace of the Governors and on official stationery wrote a two-page letter to his wife, Susan. She was back in their native Indiana awaiting the end of his tempestuous two-and-one-half-year tenure as the territory’s presidentially appointed chief executive.

The bearded, bespectacled Wallace—an ex-Civil War hero and renaissance man whose epic Biblical novel Ben-Hur: A Tale of the Christ, partly written in Santa Fe, had just been published to worldwide attention—was rarin’ to leave New Mexico. He had submitted his resignation and was waiting impatiently for the arrival of his successor, Lionel Sheldon.

“Let Gen. Sheldon come quickly is my constant wish,” Wallace declared in the handwritten letter, the original of which sits today in the Indiana Historical Society in downtown Indianapolis. “Until he has come, I must stay.”

In the very same paragraph, Wallace expressed the sentiment that for decades has thundered over the Land of Enchantment’s political landscape like a summer monsoon storm:

“All calculations based on our experiences elsewhere fail in New Mexico.”

Call it the Curse of Lew Wallace. While the gist of his observation on the local refutation of established norms is well-known among devotees of New Mexico political lore, the context surrounding his utterance is not. Why did Wallace write this? What did he mean? What factors led him to express such a cynical view of life in New Mexico 117 years ago? Are things different today?

Sound familiar? Maybe a bit like the administration of our 135th and current governor, Gary Johnson?

Viewed in this light, many of New Mexico modern-day afflictions, such as its debilitating economic structure of low wages and relatively high living costs, are merely more of the same old stuff. They follow a tradition codified more than a century ago by New Mexico’s most noted governor.

The Curse of Lew Wallace even helps explain the state’s latest debacle: the spectacular collapse of the University of New Mexico‘s search for a new president. Over the past decade, thousands of colleges around the country have hired their top leader largely without problem. Yet UNM’s last two presidential searches both have ended up in court amid allegations of excessive secrecy, state law violations, racial insensitivity and poor judgment. This is somewhat above the national average for such endeavors.

Amid a lot of rather amusing finger-pointing, UNM regents last month abandoned their year-long search—which cost an estimated $75,000 of public funds—and probably will start all over again in the fall.

That roar you hear is the laughter of Lew Wallace, wherever he is.

In present-day New Mexico, Wallace himself—son of an Indiana governor and a lawyer by profession—is a somewhat forgotten figure. Sure, there’s some recognition. One Albuquerque elementary school bears his name, along with streets in Albuquerque, Santa Fe and Clovis, and the odd building. The public display space of the museum in the Palace of the Governors contains his bust. But even there, a chair Wallace used to write Ben-Hur is locked away in storage.

Some histories of New Mexico don’t even bother to mention him. The UNM Center for Southwest Research, a major repository for New Mexico historical writings, lacks a copy of his posthumously published autobiography, the 1906 book in which his failure-in-New-Mexico comment first appeared publicly.

Yet Wallace was a widely celebrated figure when he died in Crawfordsville, Indiana, in 1905 at age 77. His many books had earned him more in royalties than any American novelist before him. With maybe 1 million copies printed in several languages, Ben-Hur became an international household word a half-century before the 1959 Oscar-winning movie starring Charlton Heston.

In Washington, D.C. a heroically uniformed, forward-looking statue of Wallace, the Union’s youngest Civil War general and later a judge of Lincoln’s accused assassins, stands in the U.S. Capitol’s famous Statuary Hall, representing Indiana. Sculpted in marble, he is the only American novelist so honored. (The New Mexico entry is Dennis Chavez, a New Mexican congressman and senator from 1931 until his death in 1962. His bronze statue, however, stands elsewhere within the Capitol, in the vestibule north of the Rotunda.)

Part of Wallace’s mystique stemmed from his stint as New Mexico’s governor. He was appointed in mid-1878 by his fellow Republican, President Rutherford B. Hayes, who had been receiving reports about rampant lawlessness in the rapidly growing, 115,000-person territory. Among the accusations: homicidal gang feuding in Lincoln County—then covering a huge 25% of the entire state—plus open corruption and land fraud in Santa Fe. The incumbent governor, Samuel B. Axtell, a San Francisco lawyer and ex-Congressman, was considered part of the problem.

Wallace arrived in Santa Fe in September 1878. Not unlike our present governor, the main priority of Wallace upon taking office was law and order. He turned his attention toward the so-called Lincoln County War, pitting rival factions feuding over money, power and politics. The violence included murders of prominent citizens, rapes and theft. Wallace himself traveled to Lincoln in March 1879 to investigate the situation and find witnesses for the many pending criminal prosecutions.

To get testimony, Wallace at one point negotiated personally with, and promised clemency to, a murderer named William Bonney, soon to become famous as the villainous Billy The Kid. Not surprisingly, the governor’s deal with Bonney quickly collapsed. Eventually, after Bonney was convicted of murder, Wallace signed his death warrant and, when he escaped, ordered up the posse that shot The Kid dead in Fort Sumner in July 1881.

As Gary Johnson would declare a century later, Wallace said in one report to Washington that the spiraling crime rate could be cut with–more prisons. He complained that the territory had escape-prone county jails and not a single state penitentiary. Again, similar to more recent times, convicted criminals were shipped to empty cells out-of-state, usually at the state prison in Nebraska.

Then there was the problem with Indians—not over gambling and taxation, like today, but over an equally sensitive issue, control of their ancestral lands. Wallace received numerous petitions from New Mexicans seeking federal help to defend against Apache attacks. Here, Wallace was largely ineffective. 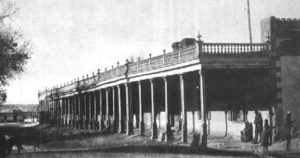 The Palace of the Governors, on the Plaza in Santa Fe, in 1878, when Lew Wallace arrived

The condition of the territorial government was dreadful. The so-called “Santa Fe Ring” of bribe-taking office-holders and bribe-giving businessmen behind the scene was in full swing. Previous governors had discarded or even sold important papers documenting the state’s history, especially papers related to important land grants. The 270-year-old Palace of the Governors was a leaky dump.

The constant between then and now is the tension among the various branches of government. In 1880, Wallace found himself caught in the crossfire of a legislature so equally divided between Republicans and Democrats that it couldn’t even organize itself. He managed to broker a deal to elect parliamentary leaders. As recounted by historian Irving McKee, the legislature approved some of Wallace’s proposals–most notably a bid to upgrade the state’s schools and make English a required subject, but shot down many others, such as a long-overdue plan to reapportion legislative districts.

Nor is Gary Johnson the first governor of New Mexico slapped down by the courts. In 1880 Wallace wanted to appoint supporter Eugene Fiske as attorney general, but the legislature flatly refused to confirm—under the influence, Wallace later wrote, of the Santa Fe Ring.

Not one to give up easily, Wallace waited until the legislature adjourned and then appointed Fiske. Opponents sued. In 1881 the state’s courts ruled against Wallace, saying he had overstepped his authority.

Overall, Wallace—an activist at heart—grew disillusioned with his declining impact. In March 1881 he took advantage of a new President, James A. Garfield, to submit his resignation. The territorial press pleaded with him to stay. “We believe Governor Wallace to be about the only reputable and worthy gentleman who was ever appointed to a federal office in New Mexico,” one paper declared.

At about the same time, as it turned out, Garfield was reading Ben-Hur. Garfield wrote in his diary that the novel so moved him that he would offer Wallace the ambassadorship to Turkey in Constantinople, hoping the author “may draw inspiration from the modern east for future literary work.” 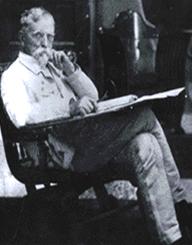 Lew Wallace in his study in Crawfordsville, Indiana, years after leaving New Mexico

Wallace was more than ready to decamp from New Mexico. “I have spent enough time in this place,” he wrote in one letter to his wife. “There is nobody here who cares for me, and nobody I care for.” On May 30, 1881, he left New Mexico in a new-fangled way: the Atchison, Topeka and Santa Fe Railroad.

A month before his departure, in that same April 29, 1881, letter to his wife, Wallace speculated almost gleefully about how the problems he faced would affect his successor—and, perhaps by extrapolating the Curse of Lew Wallace, future generations of New Mexicans. “Of course, he will do just as I did,” Wallace wrote, “have the same ideas, make the same attempts, and with the same heartiness of effort, soon cool in zeal, then finally say, `All right, let her drift.’ “

A NOTE ON SOURCES

… and published–in the singular–in his autobiography, which came out in 1906 after his death.

From its Lew Wallace Collection, the Indiana Historical Society generously provided copies (from box M292) of several letters by him, on stationery headed “Executive Office, Santa Fe, N.M.”  Among them: the April 29, 1881, letter to his wife in which he writes, “All calculations based on our experiences elsewhere fail in New Mexico.” However, while first bringing the observation to public attention, Lew Wallace: An Autobiography, published in 1906, the year after Wallace died, renders the same passage in the singular and without the marital plural possessive of “our,’’ to wit: “Every calculation based on experience elsewhere fails in New Mexico.” The discrepancy apparently occurred while preparing Wallace’s handwritten letters for publication.

Much of the other historical material cited here is drawn from published works. Besides Wallace’s autobiography, they include:

William P. Barrett, who was the Special Projects Editor for Crosswinds, is a veteran journalist for national publications. Formerly a resident of Albuquerque, he now lives in Las Vegas, Nevada. For Crosswinds, he authored or co-authored articles about the FBI Files Of Georgia O’Keeffe and lists of New Mexico’s 40 Largest Landowners, 25 Richest Persons, and Six Alleged Roswell Incident Crash Sites. His e-mail address is: wmpbarrett@gmail.com.

This site uses Akismet to reduce spam. Learn how your comment data is processed.